Ei Digital Books: an integration of art and impact


The U.S. State Department invited Ei to join the invitation-only COP22 preview press conference call. Journalists from the Wall Street Journal and the New York Times were among the respected, mainstream media on the call.

Environmental Journalism to Photojournalism
Ei Founder Holly Elmore, author of the Ei blogs, launched HollyElmore.com in June 2016 as home to the Fingertip Press, Holly Emore Images (HEI), and @ Your Service. When she publishes a blog article, Holly writes a Facebook post beginning with “PREVIEW: Hot off the Fingertip Press an article …” Thus, the Fingertip Press evolved into Holly’s nomenclature for her published articles, documents, and other written communication. 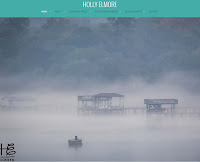 Over the years, the Ei Blogs - The IMPACT and Regeneration in ACTION (RiA), garnered strong national and global readership. On August 15, 2018 The IMPACT Blog surpassed 150,000 views and, as of this article publishing, the RiA Blog is mere hours away from the impressive 395,000 views milestone.

In late 2017 Holly expanded her communication repertoire beyond publishing articles in the Ei Blogs, trade journals, and industry papers to photojournalism in nationally distributed Southern Farm & Garden (SF&G). Rather than document Ei's important work, the SF&G articles complement and intertwine Ei Pioneers, Strategic Allies, and initiatives within the copy. 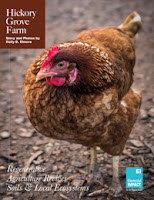 As a former Georgia Department of Transportation cement-mixing site for the construction of nearby Interstate-75, Hickory Grove Farm is an iconic case study in soil rebuilding.

Regenerative agriculture is introduced as a solution to the Earth's carbon crisis in the RiA Blog article, Beyond Sustainability: regenerative solutions. The blog article ends with a feature on the Hickory Grove Farm SF&G article. 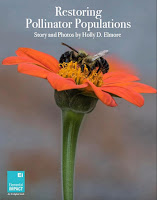 Over the past decades, pollinator populations declined significantly for a variety of reasons including, but not limited to, habitat loss, use of the "cides" (herbicides, insecticides, pesticides), and common garden & landscape practices.

The RiA Blog article, Redefining WASTE: impact of common landscape & grounds maintenance practices on urban wildlife, introduces the paradox of how neat, clean yards and landscapes are wasteful to the local ecosystem. Ei Strategic Ally Park Pride's Pollinators in Parks program is featured in the blog and the SF&G articles. Park Pride Visioning Coordinator Teri Nye educated Holly on the empowering role of pollinator gardens and proofed the articles for accuracy. 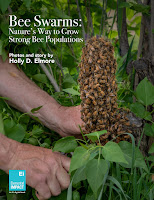 In the SF&G summer 2018 issue, a two-page photo essay, Bee Swarms: Nature’s Way to Grow Strong Bee Populations, educates on the important role bee swarms play in propagating bee populations, both from the size of and the number of colonies. The images were captured in Boulder, Colorado when Holly stumbled upon a beekeeper retrieving a bee swarm from one of his hives.

With publisher and creative director Nancy Suttles on the Ei Team, opportunities abound in the publishing arena. Nancy Suttles is an independent creative consultant with over three decades of in-depth industry experience. Highly-skilled at developing original concepts, design, photography, and production, Nancy has worked with an array of publishers, corporations, and agencies over the years. Nancy creates results-driven special interest publications, magazines, books and other marketing material for traditional print and digital media.

Nancy validates the powerful Ei partnership, “I am proud to work with such an accomplished and talented professional as Holly. Her words and beautiful photos take the reader behind-the-scenes to learn more about the process of living a more regenerative life. The introduction of the new interactive Ei digital library of books will further enhance Ei's mission on an international scale.”

Ei is integrating powerful impact and art within the Ei Digital Books and discovering new horizons for communicating initiatives under development.