Plastic film recycling is a zero waste frontier filled with potential and probabilities.

With increasing volumes of plastic film used in consumer and commercial packaging, the quantity of film landfill bound is astonishing. Industry pioneers are called upon to forge the plastic film frontier and craft new systems grounded in economics. Reduced landfill tipping costs coupled with recycling rebates are at the foundation of necessary infrastructure development.

In general plastic is recyclable as long as the stream is clean with sufficient quantity. Plastic film is highly recyclable yet the definition of a "clean stream" is confusing due to the many grades used in a wide variety of transport packaging.

Although plastic shopping bags are the most visible film product, plastic film is prominent in a myriad of consumer and commercial transport packaging. In addition to bags, common consumer film uses include bubble wrap | plastic air pillows, sleeves for newspapers, magazines & dry cleaning, and other product protection.

Escalating internet sales over the past years is a strong contributor to astonishing increases in the volume of landfill-destined plastic film, especially in the commercial sector. In addition, strong internet sales impact how products are shipped for traditional retail sales.

For the consumer, many grocery stores - Kroger, Publix and Food Lion are examples - offer plastic bag recycling via outdoor bins for their customers. Most plastic film transport packaging is accepted along with the grocery bags. UPS Stores often accept the plastic air pillows & bubble wrap for reuse in their shipping services.

With many municipalities shifting from dual or separated streams to single-stream recycling, plastic film is classified as a "contaminant" by the recycling haulers. At a MRF (materials recovery facility) single-stream recycling is sorted by material type over a series of conveyor belts and through optical sorting machinery. Plastic film wraps around sorting equipment, resulting in expensive system shutdowns; thus, valuable plastic film is considered a contaminant.

In the commercial sector plastic film is used extensively in transport packaging, ranging from shrink wrap to secure products on pallets to plastic sleeves | bags for product protection to bubble wrap | air pillows for product cushioning.

In simplistic terms, the city-wide template pilot plan was to recruit 10 - 12 industry pioneers who generate a moderate amount of plastic film in their operations. Using a small baler, the pioneers collect and bale plastic film on-site for periodic collection. A local hauler collects and delivers the small bales to a warehouse. The small bales are re-baled into standard size larger bales and stored in an empty tractor trailer. Once full, the plastic film is sold by the tractor trailer load as a raw material to a manufacturer.

With an arsenal of lessons learned, the Ei Team was ready to focus on a city-wide plastic film recycling template designed for duplication in metro areas across the nation.

During distribution center tours, the Ei Team discovered FP generated colored and clear film in their daily operations. A surprise find was the "cut room" where the disposable blue aprons were made from a recyclable plastic film grade. Once the baler was delivered, simple logistics were established to separate clear and colored plastic film. In addition, the collection bins placement was easy for the truck drivers, who brought back shrink wrap from their delivery routes.

In alignment with the CM shopping mall template, FP associates produced small plastic film bales that were collected by a hauler for consolidation into standard size bales.

The Ei Plastic Film Recovery Pilot @ FreshPoint video gives an overview of the pilot along with new practices created for contaminant-free film collection.

Due to unforeseen circumstances ranging from promotions to long-term illness to business model shifts to internal corporate politics, the S-SMRT was put on hold in early 2015. The foundation is built and ready for a new life at the perfect time!

The plastic film recycling template tagline - If it was easy, it would already be done - is perfect for returning to action mode within the zero waste frontier.
Posted by Holly Elmore at 10:32 PM 2 comments: 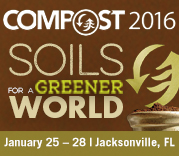 In late January industry professionals traveled from across the nation to the 24th Annual U.S. Composting Council (USCC) Conference - Soils for a Greener World - hosted at the Hyatt Regency Riverfront Hotel in Jacksonville, FL. Though a treacherous winter storm kept several speakers and award recipients snow bound in the Northeast, the conference was well attended by those eager to participate in the excellent program.

Pre-conference activities included a wide array of half and full-day workshops ranging from Aerated Static Pile Composting - Applications and Advancements to Best Practices in Community Composting Workshop along with the Annual meeting of the Compostable Plastics Task Force. The day ended with a Grand Opening Reception in the exhibit hall.

The two-day conference program included opening and closing plenary sessions along with a wide array of concurrent sessions throughout each day. Networking is an important conference component. In addition to the opening reception, the program included 45-minute morning & afternoon networking breaks in the exhibit hall and a lunch was provided in the hall on the first day.

An excellent speaker, Mitch used humor to make important points in his The Critical Role of Organics: Where Are We Heading? presentation. In addition, Joe Lamp'l, Star of "Growing a Greener World" gave a superb, entertaining plenary presentation including points on how to build the compost story.

In the afternoon, Elemental Impact (Ei) hosted a well attended 90-minute panel presentation, Getting to Zero Waste: Composting at Special Events, sponsored by Ei Partner NatureWorks. Moderated by Ei Founder Holly Elmore, the panel showcased the Zero Food Waste Journeys at two prominent Atlanta annual events, Afternoon in the Country (AITC) and RayDay. Both events were hosted by the Inn at Serenbe within the idyllic Serenbe Community, where nature, passion, creativity and community are valued.

Doug came back to the podium for the event synopses. With beautiful weather, paid Waste Ambassadors and one caterer, the 2015 RayDay event in early October was literally zero food waste via on-site food waste composting at Serenbe. The caterer brought the prep food waste to the event, closing the loop on zero food waste. Due to extensive pre-planning there were minimal lessons learned in the nearly perfect event conditions.

On the other hand, AITC was riddled with extraordinary challenges on an early November event day. A rainy day, coupled with prior ten straight days straight of rain prior to the event, greeted organizers, participants and guests with tremendous mud during set-up and throughout the festivities.

Of the 20 committed volunteers, only four showed up ready-to-work in the extreme conditions. And work they did! Cardboard waste & recycling bins disintegrated into the mud. The farm tractor promised at 11:00 a.m. was finally delivered at 4:00 p.m. as the event closed. Note the tractor was necessary for the compost pile construction. ... and there were 90+ chefs | restaurants participating at AITC!

Next at the podium was Kristen Baskin, Let Us Compost (LUC) owner, who orchestrated the on-site event food waste composting at Serenbe. In her presentation, Kristen gave an overview of the successful on-site composting practices at both events.

Throughout the events, Kristen kept event staff | volunteers efficient weighing food waste bags as they arrived at the compost area, cleansing the food waste of contaminants and sorting compostable flatware for grinding prior to adding to the compost pile. LUC prepared an impressive 2015 AITC video of the on-site food waste composting practices.

As the final panelist, City of Atlanta Zero Waste Manager Boyd Leake spoke on the city policy implications from the zero food waste success at the annual events. In addition, Boyd played an integral role in the Zero Food Waste Journeys under his Community Environmental Management umbrella.

SMAT members Rick Lombardo of NaturBag and Sarah Martell with Innovia Films, who participated in the journeys via product donation, education session presentations and event support, joined the panel audience.

Ei Partners were prominent at the conference via exhibit hall booths, as Board Members (USCC: Sarah Martinez with EcoProducts | BPI: Vineet Dalal with NaturTec), panel presenters and meeting with good industry friends.

On the final conference day, the afternoon plenary session opened with the Annual US Composting Council Awards Ceremony; USCC Executive Director Frank Franciosi served as the Master of Ceremonies. Industry icon Dr. Rufus Chaney with the U.S. Department of Agriculture was a focal point from numerous perspectives.

BioCycle Magazine Editor Nora Goldstein presented the Jerome Goldstein Lifetime Award, the Composting Council’s highest recognition, to Dr. Chaney. The highest honor is named on behalf of Nora's father. Dr. K.C. Das, University of Georgia Department of Biological and Agricultural Engineering Professor, received the 2015 Rufus Chaney Award for his extensive industry accomplishments over the past decades. USCC Board Member Dr. Sally Brown with the University of Washington studied under Dr. Chaney and requested a photo with her mentor.

With Mathy still snowbound in D.C., Cheryl Coleman with the EPA pinch hit as the closing plenary keynote for the Composting Council Conference - she was stellar!

Post-conference the USCC hosted the annual Equipment Show & Demonstrations. It is the largest “live” equipment demonstrations for the composting and wood recycling industry in the U.S.

Conference attendees departed educated on new technologies, inspired by industry success and eager to follow-up with new friends.
Posted by Holly Elmore at 10:15 AM 1 comment: