The Power of Connection

One of Elemental Impact (Ei)'s valuable industry roles is connecting colleagues | organizations together who share synergistic missions and programs. Often introductions evolve into important Ei initiatives. Other times introductions result in powerful alliances yet do not directly involve Ei in subsequent programs.

A prime example is Ei's 2011 introduction of the National Restaurant Association (NRA) to the U.S. Composting Council (USCC). As home to the Zero Waste Zones (ZWZ) - the nation's forerunner for the commercial collection of food waste for compost, Ei worked closely with the foodservice industry on collection of food waste for composting. In addition, Ei developed a strong relationship with the USCC and food waste compost manufacturers.

It was natural to introduce the respective national trade associations for food waste generators to food waste destinations. SUCCESS: the ZWA Blog article, Collaboration is Key to Success, announces the formal Memorandum of Understanding executed between the NRA and the USCC.

The Ei Team - Industry Pioneers, Industry Experts, Strategic Allies and Advisory Council - is a powerful entourage of industry leadership eager to share their expertise, experience and wisdom. Ei introductions are central to a multitude of successful pilots, programs, grants and relationships.

U.S. Environmental Protection Agency (EPA):
The EPA Region 4 was instrumental in the ZWZ launch and worked closely with Ei Founder Holly Elmore, then Green Foodservice Alliance Founder & Executive Director, on developing the program. With a solid relationship, Ei and the EPA continue to work together on industry initiatives.

The ZWA Blog article, Scaling Up Composting in Charlotte, NC, gives an overview of grant objectives, tasks and goal.

With strong connections to foodservice industry leaders, Ei joined the FRC as an Endorser, committing to recruit Program Participants as well as additional Endorsers.

In February 2014 Holly and EPA Environmental Scientist Kim Charick embarked on a meeting | call marathon recruiting FRC Program Participants and Endorsers. It was empowering to reconnect with the early zero waste pioneers, most Founding ZWZ Participants.

In spring 2012, the Georgia Dome accepted the SFCI Event Venue Pilot invitation. Along with the GWCC and Centennial Olympic Park, the Georgia Dome was one of three facilities under the state-owned Georgia World Congress Center Authority (GWCCA). In addition, the GWCCA manages the Savannah International Trade & Convention Center.

With the spring 2017 Georgia Dome decommissioning, the SFCI Event Venue Pilot shifts to the GWCC.

The gathering catalyst was Tim's enthusiasm to create a successful Atlanta Falcon's tailgate recycling program for the 2012 season. Years ago Cindy launched GA Tech tailgate recycling on game days with success and was happy to share her program logistics. Conversation quickly moved beyond tailgate recycling to GA Tech's comprehensive program, culminating in an amazing campus tour.

Subsequent to the introduction, GA Tech and GWCC developed a close working relationship and Tim | Cindy separately thanked Ei for the introduction. The ZWA Blog post, ZWZ Participants Work Together, is an overview of the tour and the Ei FB album, 02-27-12 GA Tech Hosts GWCC, is the pictorial recap.

The Ei Team crafted a powerful two-hour session that included ample time for Q&A and discussion throughout the presentations. On April 8, 2015 the Ei Partners converged on Atlanta for the Levy education session.

A pictorial recount of the tour is included in the Ei FB album, Ei Connects.

USZWBC | NZWBC Official Media Partner:
Ei served as the Official NZWBC Media Partner for the 2014, 2015 & 2016 conferences and as the Official USZWBC Media partner for 2015 & 2016. In addition to writing USZWBC-related blog articles, Ei served as a connection base for the USZWBC on many fronts. With the USZWBC under the USGBC umbrella, the strong Ei relationship moves into a broader scope.

Zero Food Waste Journeys
In 2015 the Ei SMAT - Sustainable Materials ACTION Team - embarked on zero food waste journeys at two prominent Atlanta events, RayDay and Afternoon in the Country (AITC). Both events were hosted by the Inn at Serenbe, within the Serenbe community.

SFCI Co-Chair Doug Kunnemann of NatureWorks took a leadership role with SMAT during the education, planning, and execution phases. The first step was to educate event organizers on the importance of using BPI-Certified compostable serviceware. Ei contracted with Let Us Compost (LUC) to orchestrate the AITC | RayDay on-site food waste compost operations along with post-event follow-up.

Amidst idyllic weather and a sole foodservice provider, RayDay achieved zero food waste, including the kitchen scraps from the food truck caterer.

While a perfect scenario came together for RayDay, AITC was riddled with extraordinary challenges on event day. A rainy event day, coupled with prior ten days straight of rain, culminated in tremendous mud during set-up and throughout the event. ... and there were 90+ chefs | restaurants participating at AITC! Thanks to heroic team work, a total of 1,800 pounds of food waste was composted on site. 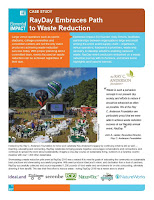 The ZWA Blog article, NatureWorks publishes zero food waste case studies, gives an overview of the case studies along with links to download the documents.

Affairs to Remember (ATR)
In 2009 ATR was designated Atlanta's First ZWZ Caterer by the Green Foodservice Alliance (GFA), the ZWZ founding organization within the Georgia Restaurant Association umbrella. In addition, ATR Managing Director Patrick Cuccaro served on the GFA Advisory Board and was instrumental with Ei's 2010 formation as the new ZWZ home.

Sponsored by Councilmember Felicia Moore, the City of Atlanta proclaimed November 11, 2014 "Affairs to Remember Caterers Day" in recognition of sustainability efforts, and in particular the milestone of having diverted one million pounds of recoverable materials from Georgia landfills.

The ZWA Blog article, ... and the journey began with a delicious divorce from the landfill!, announces the proclamation and includes the ATR sustainability story along with several of the below introductions.

SC ZWZ Tours:
In the above mentioned SC ZWZ Tours, ATR hosted a lovely lunch at their offices for the August 2011 tours. In addition to an impressive ATR facility tour, guests were treated to a 100% compostable boxed lunch. Back in 2011 it took research and ingenuity to craft a compostable lunch with readily available products.

When the City of Atlanta was chosen as one of the 100 Resilient Cities pioneered by The Rockefeller Foundation, Stephanie was appointed to the Chief Resilience Officer position.

On March 8, 2017 Ei orchestrated a powerful meeting of Atlanta's sustainability leadership hosted by ATR. The overt meeting purpose was to introduce new City of Atlanta Director of Sustainability John Rutherford Seydel to ATR. In addition to John and Boyd from the City of Atlanta, Mercedes-Benz Stadium General Manager Scott Jenkins and Ray C. Anderson Foundation Executive Director John Lanier joined the meeting. It was an inspiring lunch filled with empowering conversation and amazing cuisine.

Mission Accomplished: the original meeting intention was to harness industry synergies among the complementary organizations. During the 2014 presentation, it was empowering to witness the many joint pilots | programs among meeting participants.

The ZWA Blog article, Sustainable F&B Packaging: moving from an emerging to a maturing industry, documents the final 2014 meeting.


Mercedes-Benz Stadium (MBS)
Ei connected with MBS General Manager Scott Jenkins upon his Spring 2014 arrival in Atlanta, three years prior to the stadium's summer 2017 opening. During his first months in Atlanta, Ei was instrumental in introducing Scott to Atlanta's sustainability community.

2014 NZWBC Plenary Panel:
Within weeks of his arrival, Scott served on the above mentioned NZWBC The Atlanta Zero Waste Story opening plenary panel orchestrated by Holly. The plenary panel was Scott's first presentation as MBS GM!

It was inspiring to learn the intricacies of how "MBS will be the Heart of Atlanta and home to the biggest championships in the United States." Throughout his presentation, Scott emphasized the economics grounding the MBS sustainability commitment.

The IMPACT Blog article, Sustainability: an economic driver, is an overview of Scott's presentation, which is available for download on the Ei LAI page.

In November 2015 Scott joined the the EMF USA Board in preparation for the U.S. Circular Economy Program February 2016 launch.

A lovely dinner followed with the Georgia Tech Center for Sustainable Business Founding Managing Director Howard Connell and one his colleagues. Timing was perfect for the Andrew | Howard introduction as Georgia Tech was interested in the EMF Pioneer Universities Program.

In the early research phase for the scoping paper, Andrew requested Holly to assist Doug Walker, lead author and program manager, with education on the U.S. state of urban organic recycling. In addition to the education, Holly introduced Doug to Ei Strategic Ally Brenda Platt, Institute for Local Self-Reliance (ILSR) co-director, as an excellent resource via her Neighborhood Soils Rebuilding and community composting programs in-place.

Prior to publication, Holly reviewed the document draft and submitted content comments.

On March 28, 2017 EMF issued the Urban Biocycles scoping paper. It is a well-researched paper on the current state of global organic recycling with a focus on the economic opportunities using a Circular Economy approach for urban organics. The Urban Biocycles scoping paper sets a solid foundation for further research and development of urban organic recycling | manufacturing systems within a Circular Economy.

Ei | Holly and ILSR | Brenda are listed in the paper credits as Expert Input and Case Study Contributors.

Connectivity and collaboration are keys for success, especially when forging industry frontiers. In 2012, Ei introduced the power of the WE Consciousness in the ZWA Blog article, Zero Waste is a Team Sport:


The "I" focus is replaced with the "WE" focus. The impact of our actions extends to the entire community and beyond; collective action accomplishes more profound results than singular effort. By working together, synergies are unlocked, unnecessary boundaries, including competitive barriers, disintegrate, and creative energies catapult possibilities into grounded realities.

The Power of Connection is a valuable asset. Ei is honored to serve as the conduit between prominent industry friends and facilitate powerful introductions. When we work together, the possibilities are endless and solutions dissolve monumental barriers.
Posted by Holly Elmore at 12:25 AM 3 comments: