When students truly come first, a commitment to health and wellness naturally follows.

Bringing foodservice operations in-house was a significant step in serving students healthy, freshly prepared food. Another strong step was entering into a long-term lease for the Farm @ Cragmoor, a sixteen-acre farm on land owned by the Spartanburg County Foundation and administered by Upstate Forever. SCSD6 took possession of the farm in 2016.

The RiA Magazine article, Spartanburg County School District Six: a culture of EXCELLENCE!, is a comprehensive overview of the school district, the Farm @ Cragmoor, and the creation of the Farm 2 School program.

Inspired, Ei Founder Holly Elmore traveled to Greenville | Spartanburg in May 2019 to meet the masterminds behind the healthy-food school programs and tour their respective operations. Mary was generous with her time, connections, and spirit as she hosted Holly for two-consecutive days of meetings and tours.

On May 14 Darryl, along with SCSD6 Deputy Superintendent Dr. Greg Cantrell, hosted Mary and Holly for an introductory meeting in the district's offices. Afterwards, Darryl and Greg took Mary and Holly on tours of the campus greenhouse followed by the SCSD6 Farm @ Cragmoor where healthy, organic food is grown for the school cafeterias. The locally grown, healthy-food commitment at SCSD6 was evident and impressive.

Mary and Holly returned to the Farm @ Cragmoor in August to witness the farm's segue from preparation to fully operational in time for the 2019 - 2020 school year.

A Significant Investment
For the first year, farm staff tested the land to determine what could be grown crop-wise for the official launch as an operating farm in 2017. The SCSD6 Farm @ Cragmoor is the foundation for creating a hyper-local food system for SCSD6.

From inception, the SCSD6 Farm @ Cragmoor was U.S. Department of Agriculture (USDA) Good Agricultural Practices certified. With the land in possession for three-consecutive years, SCSD6 is in the midst of obtaining USDA Organic certification. In accordance with the USDA National Organic Program standards, organic crops must be grown on land that is free from prohibited pesticides, herbicides, and synthetic fertilizers for three years preceding growth.

With the farm research complete, SCSD6 invested in the farm staff and equipment necessary to fully embark on the Farm 2 School initiative. In 2018, SCSD6 invested in an impressive packing house including a wash line for root crops, an ice machine for packing broccoli & other vegetables, and a dual walk-in cooler system.

The coolers are maintained at different temperatures to maximize optimal shelf life and produce quality. In addition, it is important to store certain fruits and vegetables separately. For example, onions and potatoes excrete incompatible gasses that lead to faster spoilage for nearby produce.

Only root vegetables are cleaned in the wash line as rinsing fruits and vegetables may lead to earlier spoilage. Thus, field crops such a zucchini, squash, watermelon, tomatoes, lettuces, and herbs are field-packed and washed in the cafeterias prior to kitchen prep. Lettuces and herbs from the greenhouse are transported to the packing house where they are aggregated with the farm crops for delivery to the district cafeterias via a refrigerated truck.

Upon arrival for the August 14 photo shoot, the brand-new refrigerated truck was awaiting its portrait. So new, the truck was sparkling white with no blemishes from general wear and tear. Once loaded with fresh produce cleaned and packaged in the packing house, the truck will deliver the organic food to the SCSD6 fourteen school cafeterias.

In August the foundation was laid and electrical boxes installed for a new greenhouse. While the original greenhouse contains the Farm 2 School program hydroponics system for lettuce production, the second greenhouse is intended for tomato crops. The SCSD6 impressive hydroponics greenhouse was featured in the RiA Magazine article, A Hydroponic-Agriculture Renaissance.

Another investment was hiring Farm 2 School Director Lisa Stansell. Mere weeks in the position at the August-photo shoot, Lisa brings her expertise from her prior role as a Greenville County agriculture teacher to the Farm 2 School program.


In the Field
August was a busy time on the farm as the staff prepared for the 2019 - 2020 school year starting late in the month. With the significant investments made, the Farm @ Cragmoor segued from preparation to fully operational in time for the new school year.

The crops planted during the May visit were harvested and the fields ready for a second planting. In August, peppers, tomatoes, okra and lettuces was in full production and the packing-house staff were busy sorting and packaging the clean vegetables.

In the field, workers planted fall crops while mature cover crops rejuvenated the soils within crop-rotation best practices. Over the summer, zinnias were planted as a cover crop and doubled as a cash crop at the summer farmer's market. Lesson learned: plant zinnias in rows so the entire crop may be harvested for market bouquets.

To maintain the farm's high food-safety standards administered by Director of Food Safety and Sustainability Patricia Tripp, a wash station was installed in the field for workers.

The second section of the Ei FB album, Spartanburg County School District 6, are images from the August-photo shoot while the first section is a pictorial recap of the May visit.

SCSC6 is an exemplary model for the magical outcomes when students truly come first.
Posted by Holly Elmore at 3:20 PM No comments:

The Legacy of the AMAZING Cindy Jackson 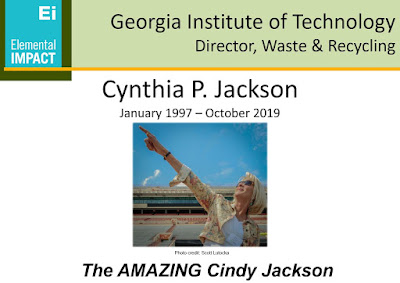 On October 31, 2019 Zero-Waste Icon Cindy Jackson retired from the Georgia Institute of Technology (Ga Tech) as the Director of Waste & Recycling. Under Cindy's 22-year leadership, Ga Tech never succumbed to single-stream systems and the award-wining recycling program operated as a profit center.

Award-Winning Recycling
When Cindy arrived at Ga Tech in 1997, there was no formal recycling program in-place. By 2008, the Ga Tech recycling program was nationally recognized as an industry leader with two prominent awards:
In 2009 Ga Tech joined the Zero Waste Zones (ZWZ,) the nation's forerunner in the commercial collection of food waste for compost, and Cindy implemented back-of-the-house food-waste collection at campus-dining facilities. Along with then Ga Tech First Lady Val Peterson, Cindy attended the ZWZ Two-Year Anniversary Press Conference.

Preparing for the 2019 opening of the Kendeda Building, Ga Tech's Living Building, in October 2017 Cindy launched a composting pilot in the Engineered Biosystems Building (EBB). Though the successful pilot is complete, organics collection for compost continues in the EBB.

Although glass recycling is a challenge in single-stream systems, at Ga Tech source-separated, clean glass is hauled and sold to a local glass processor. When treated respectfully, glass is a valuable material.

Cindy operates within a philosophy of "Lighten-Up, Be Heard, Be Effective." Recycling centers in the Klaus Advance Computing Building are complete with themes, including the The Lorax by Dr. Seuss and Ecosystem ∞ Ecodangers rooms.

When the AWARE Program (Actively Working to Achieve Resource Efficiency) launched in 2009, then President Bud Peterson endorsed the program. In an AWARE building, each workstation is provided a clever three-bin system: Tom (large blue, for paper), Tim (medium blue, for cans & bottles), and Tiny (small black, for trash). Rather than custodial staff, employees empty their bins at building-recycling centers.

Nationally respected for operating a recycling program based on integrity, Cindy presented on Ga Tech's program at the 2014 National Zero Waste Business Conference (NZWBC) hosted in Atlanta and the 2016 NZWBC hosted in Austin, TX. In preparation for the 2014 NZWBC, Cindy welcomed U.S. Zero Waste Business Council Executive Director Stephanie Barger for a recycling-program tour. Stephanie was most impressed.

With over 70 exhibitors and eco-friendly giveaways, recycling opportunities, a clothing swap, an office-supply exchange, live music, organic popcorn, and more, the Ga Tech Earth Day Festival is one of the largest celebrations in the southeast. The annual Earth Day Festival is free and open to the public.

Along with EPA R4 and the Chick-fil-A Peach Bowl, Cindy and Tim founded the Collegiate Sports Sustainability Summit in 2012. Ga Tech hosted the second-annual summit.

Under Cindy's leadership, Ga Tech hosted the first-annual Facilities Sustainability Forum in October 2017 to an enthusiastic audience from the university and beyond. The Forum was an opportunity to educate and share Ga Tech's impressive facilities-maintenance programs: award-winning landscape services, Green Seal-certified cleaning program, and the recycling program.

Via Cindy's invitation, Holly presented at the inaugural forum as the featured presenter. Within her opening remarks, Holly shared the long-term, powerful Ga Tech | Ei relationship dating back to the 2009 ZWZ launch.

Working closely with Director of Building Services Tommy Little and his team, Cindy was integral to the Ei Conscious Cleaning Demo hosted at Ga Tech in March 2018. The RiA article, The Evolution of Standard Cleaning Practices, showcases Ga Tech's stellar conscious cleaning program as well as gives a demo overview.

Always Learning, Always Growing
Always eager to expand her professional horizons, Cindy attended Annual Ei Partner Meetings and participated in other Ei Atlanta-based activities, such as the 2015 Atlanta Ei Partner Tours. Quick to ask many questions, Cindy was most appreciated at the partner meetings and tours.

In June 2015 Ei Partners converged on Atlanta from across the nation for an invigorating two days of tours, education and camaraderie. Cindy joined the partners for tours of the Pratt paper-recycling plant as well as the Novelis aluminum-recycling plant, which was quite an experience. The IMPACT Magazine article, Atlanta Ei Partner Tours, is an overview of the two-powerful days. For a pictorial recap visit the Ei FB Album, Atlanta Ei Partner Tours.

At Cindy's request, Ei orchestrated an introduction of the Ga Tech sustainability team to to Kennesaw State University (KSU) Hickory Grove Farm and KSU Dining Services in June 2019. Synergies abounded during the farm tour and dining-services meeting between Georgia Tech and KSU.

While Ga Tech excels in its waste & recycling program as well as commercial-cleaning and grounds-maintenance practices, KSU is an industry hero in sustainable dining. Within weeks, Cindy hosted the KSU facilities team for a Ga Tech recycling-program tour.

The RiA Magazine article, Success is not static: evolution is required to create and sustain regeneration, gives an overview of the empowering tour and meeting. An Ei FB album, Ei Connects, section is a pictorial recap of the meeting and tour from an Ei-Connects perspective.

Holly's presentation showcased why Cindy is indeed "The AMAZING Cindy Jackson!" The presentation is available for download on the Ei Speaking Engagement page.

The love and respect for Cindy was evident via the planned and impromptu remarks. Tommy enjoyed telling a decades-old story about Cindy from their days at Auburn together. The Ga Tech waste & recycling staff made Cindy a Harry Potter-parody book for her to treasure.

Additionally, Cindy's sister and brother gave touching remarks on how proud they are of Cindy; the strong family bond was profound.

The Ei FB album, Cindy Jackson Retires, gives a pictorial recap of Cindy's Ei interactions as well as images from the retirement celebration. 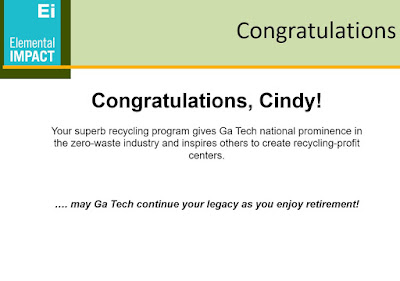