Over the past decade, sustainability moved from a buzz word to a movement to a culture within leading communities, universities, and businesses. Significant strides were made in zero-waste practices, renewable energy technology, and reduced carbon | water footprints. Yet the glaciers continue to melt, the ocean acidification levels are increasing, and desertification is escalating.

The Regeneration in ACTION (RiA) article, Beyond Sustainability: Regenerative Solutions, proposes regenerative solutions in the form of Urban Carbon Sinks to restore the carbon cycles and pending crises. The RiA article, Carbon Crisis: simply a matter of balance, introduces carbon cycles and explains how their out-of-balance state creates alarming scenarios.

A dangerous dilemma is brewing with an increasing global population and a diminishing ability to produce food. Healthy soil is necessary to generate nutritious food, whether plant- or animal-based.

Yet plankton is perishing at astonishing rates due to ocean acidification and warmer water temperatures. Thus, the atmospheric oxygen supply is diminishing and may eventually lead to potential asphyxiation for land-based animals and eventual species extinction.

A 68% average decline of birds, amphibians, mammals, fish, and reptiles since 1970.

The findings are clear: Our relationship with nature is broken.

Biodiversity – the rich diversity of life on Earth – is being lost at an alarming rate. This loss effects our own health and well-being. Today, catastrophic impacts for people and the planet loom closer than ever. 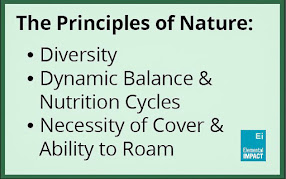 Insect Apocalypse
Insects are integral to the natural ecosystem foundation and essential to supporting the Earth’s life web. At the base of the prey hierarchy, insects are food for fish, mammals, and birds. In addition to recycling soil-system nutrients, insects play an essential role in the decomposition portion of nature’s circular-life cycle.

Since the 1970’s the Earth’s insect population suffered from severe population declines as well as loss of diversity.

The NY Times 2018 article, The Insect Apocalypse Is Here. What does it mean for the rest of life on Earth?, reported: The German study found that, measured simply by weight, the overall abundance of flying insects in German nature reserves had decreased by 75 percent over just 27 years. If you looked at midsummer population peaks, the drop was 82 percent.

According to the November 2019 Somerset Wildlife Trust Insect Declines and Why They Matter Report by Professor Dave Goulson, 41% of insect species are threatened with extinction.

Contributing factors to the demise of insect populations include:

By re-establishing abundant land-based carbon sinks, the carbon cycles may return to balance via atmospheric carbon returning to the soils. Once a threshold of lowered atmospheric carbon is reached, the oceans will release their stored excess carbon into the atmosphere. Thus, ocean acidification will reverse, and marine plant life may revive back into healthy oxygen-producing states.

Regenerative agriculture practices include no-till farming, diverse crops, and use of cover crops and are void of “cides” usage (herbicides, pesticides, insecticides, and fungicides.) For livestock farming, herds are rotated among fields allowing the animals’ excrements to serve as natural fertilizer instead of potentially toxic waste. The 2018 RiA article, Regenerating a Bright Future for Planet Earth, delves deeper in the regenerative agriculture principles and showcases several regenerative farms.

Beyond regenerative landscape practices, rewilding urban land restores the natural ecosystem that evolved over thousands of years. Rewilding land requires the restoration of native plants and cultivates food for indigenous insects. Strong insect populations are the foundation for restoring healthy predator/prey hierarchies that once thrived prior to urban development.

In his New York Times bestseller, Nature’s Best Hope: A New Approach to Conservation that Starts in your Yard, Doug Tallamy encourages citizens to rewild their yards via replacing toxic lawns with native plants that support local insect populations. Caterpillars are a primary food source for many birds and other wildlife. According to Doug, Carolina chickadees must catch 6,240 – 9,120 caterpillars to raise one clutch.

With more than 40 million acres of lawn nationwide, there is tremendous potential to reverse the diminishing food and oxygen deficiency crisis simply by rewilding lawns!

A first step in the Urban Carbon Sink-Development Template is the rewilding of a private-home lawn. With private ownership, controlled documentation of the soil-health baseline as well as pilot challenges, lessons learned, and success is easily facilitated. The intention is to partner with the state agriculture university along with local government, a seed co-op, gardening clubs, schools, and other engaged organizations.

Below is an outline draft of the various pilot stages:

Individual Action is Key
If each individual takes regenerative action that works within their life, the collective impact will prove staggering and alter the current destructive path humanity created over the past millenniums.

The time to take individual action is NOW!

____________________________________
About Elemental Impact:
Elemental Impact (Ei) is a 501(c)3 non-profit founded in 2010 as the home to the Zero Waste Zones, the forerunner in the nation for the commercial collection of food waste for compost. In June 2017, Ei announced the Era of Recycling Refinement was Mission Accomplished and entered the Era of Regeneration. Current focus areas include Nature Prevails, Soil Health | Regenerative Agriculture, and Water Use | Toxicity.
MISSION:
To work with industry leaders to create best regenerative operating practices where the entire value-chain benefits, including corporate bottom lines, communities, and the environment. Through education and collaboration, establish best practices as standard practices.
Ei’s tagline – Regeneration in ACTION – is the foundation for Ei endeavors.
The following mantra is at the core of Ei work:
Ei is a creator, an incubator.
Ei determines what could be done that is not being done and gets it done.
Ei brings the possible out of impossible.
Ei identifies pioneers and creates heroes.
For additional information, contact Holly Elmore at 404-261-4690 | holly@elementalimpact.org
Posted by Holly Elmore at 7:15 PM