Since inception Elemental Impact (Ei) lived the tagline Sustainability in ACTION! Working with a powerful team of Ei Pioneers and Ei Industry Experts, Ei evolved into a respected national non-profit known for introducing sustainable best practices within a range of industries.

Ei is a creator, an incubator.
Ei determines what could be done that is not being done and gets it done.
Ei brings the possible out of impossible.
Ei identifies pioneers and creates heroes.

As documented in The IMPACT Blog, Happy 8th Birthday, Ei!,  2017 was the Year of Shifting Gears. In 2017 Ei announced Soil Health, regenerating the foundation of life, was a prime focus, replacing the prominent Recycling Refinement (RR) work. In addition, Ei Leadership experienced a changing of the guard and Ei welcomed new Strategic Allies.

For documentation of Ei's RR era, visit the Milestone's page for a monthly listing of profound action within the Ei journey dating back to pre-inception; the Mission Accomplished page lists Ei endeavors with achieved goals and considered complete via a sale, term expiration or simply mission accomplished!

With gears shifted, the time arrived to assess the use of "sustainability" in the Ei tagline.

Beyond Circles: the Spiral
Ei Founder Holly Elmore never aligned with the terms: closing the loop, circular economy and any other nomenclature referring to a circle. The concept of a circle implies a process always returns to its starting point in the same structure as it began.

Innately, Holly understood natural cycles align with Fibonacci Sequence geometries. The Fibonacci Sequence is derived by adding a number with its predecessor to arrive at the successor number: 0,1, 1, 2, 3, 5, 8, 13, 21, 34 ... in perpetuity. According to TheGoldenNumber.net:

A Golden spiral is very similar to the Fibonacci spiral but is based on a series of identically proportioned golden rectangles, each having a golden ratio of 1.618 of the length of the long side to that of the short side of the rectangle:

As stated by the Institute for Ethics & Emerging Technologies Chairman of the Board George Dvorsky: The famous Fibonacci sequence has captivated mathematicians, artists, designers, and scientists for centuries. Also known as the Golden Ratio, its ubiquity and astounding functionality in nature suggest its importance as a fundamental characteristic of the Universe.

In 2012 the ZWA Blog articles, Perpetual Life Cycle System - simplicity is key and The Perpetual Spiral, the evolution from a zero waste focus to nature's no waste systems is introduced as an Ei platform. Here are several quotes from the articles:


In nature "waste" does not exist, rather a perpetual life cycle rearranges molecular structures so the finished product for one use is the basis for its next life.

Remember death is always followed by birth - we are in the process of birthing a civilization where technology-based solutions mirror nature's perfect regeneration processes.

Beyond Sustainability, Beyond Resilience: Regeneration
Over the past decade, sustainability moved from a buzz word to a movement to a culture within leading communities, universities and businesses. Significant strides were made in zero waste practices, renewable energy technology, and reduced carbon | water footprints. Yet the glaciers continue to melt, the ocean acidification levels are increasing, and desertification is escalating.

Beginning with the above paragraph, the ZWA Blog article, Beyond Sustainability: Regenerative Solutions, articulates the pending oxygen deficiency and food crisis substantiated with prominent scientific research. The article questions whether the established sustainability movement and the new resilience focus are enough to reverse the out-of-balance carbon cycles causing the pending crisis.

To avoid a doom and gloom perspective, it is important to simplify the scenario and discover regenerative solutions. Beyond sustainability and resilience, regeneration focuses on rebuilding and restoring nature's perfect system.

As the meeting closed, the theme for the day emerged: water infiltration rates. The Ei Team pledged to work with Ga Tech on increasing water infiltration rates at their urban campus. In urban settings, impervious surfaces coupled with compacted soils result in common stormwater runoff vs. rainwater replenishing the soils and underground aquifers. Most often stormwater runoff collects significant pollutants from roadways and gutters before flowing into the sewer system.

Steve educated on the challenges inherent within employing regenerative landscape practices at the nation's fourth-largest convention center (and world's largest LEED-certified convention center!) Much of the landscaped common areas are built on top of the nine-floor main parking deck. Thus, well-structured soil infiltrated with ample water exceeds safe weight limits for the areas.

As a result of the meeting, KTG and SF&G are co-promotional partners with KTG providing SF&G content on regenerative agriculture along with examples of successful farms. In return, KTG promotes SF&G in their powerful social media networks.

The Flint River headwaters are a series of springs and tributaries meeting to form the Flint River near
the Atlanta Airport; the river then flows underneath the airport runways. A significant portion of the headwaters is covered with building structure | pavement or flows through drainage ditches.

With 220 miles of unimpeded flow through Georgia, the Flint River is one of only 40 rivers in the U.S. that flows more than 200 river miles unimpeded. In 2009 and 2013, American Rivers listed the Flint River as one of the most endangered rivers in America.

Through the SFI-ATL, the Ei Team will find a perfect niche within Finding the Flint projects that supports the Atlanta Airport and the Ei Soil Health platform.

Regeneration in ACTION
The following day, Finian was the lead panelist on the Ei-Hosted panel, Compost's Empowering Role in Sustainable Soils, at the U.S. Composting Council Conference hosted in Atlanta. In his excellent A New View presentation, Finian introduced the Degenerative → Sustainable → Regenerative model. 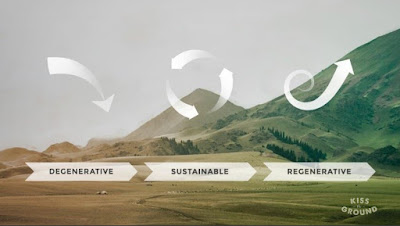 When early humans moved from their hunter | gatherer lifestyle to communal living with domesticated plants and animals, humanity entered the degenerative era. The ground was cleared of trees and other plants and then tilled for gardens and small farms with no regard for the destroyed soil ecosystems.

The ZWA Blog article, Beyond Sustainability: Regenerative Solutions, explains how traditional agriculture methods are a root cause of the current carbon crisis and mass desertification underway around the globe. Thus, the symbol for the degenerative era is a downward facing arrow.

Within the sustainability movement, used materials are returned back to their original state or a renewed purpose. Though admirable, sustainability goals are to stop the destruction yet do not focus on restoring soils and resources lost within the degenerative era. In addition, sustainability is merely a movement without broad acceptance across cultures; the majority of humans remain within the degenerative era, further diminishing the Earth's limited resources. Thus, the sustainable symbol for is the recycling circle of connecting arrows.

Once the atmospheric carbon reduces to a certain threshold, the oceans will release carbon into the atmosphere, reversing ocean acidification. Thus, marine plant life once again thrives, generating ample oxygen into the atmosphere. Soil regeneration addresses the food | desertification and oxygen components of the pending crisis. The symbol for regeneration is a spiral with an upward facing arrow at the top.

The time is NOW to move beyond sustainability | resilience and embrace regenerative solutions that return the carbon cycles to a healthy, balanced state. The food and oxygen crisis is real and grounded in solid scientific research. Regenerative solutions are simple and align with nature's perfect systems.

... and Ei's new tagline is Regeneration in ACTION!
Posted by Holly Elmore at 2:57 PM