In 2009 the Zero Waste Zones (ZWZ) were launched as the nation's pioneer in the commercial collection of food waste for composting. Under the ZWZ program participants perfected the best practices for back-of-the-house prep waste collection and shared their lessons learned, challenges and successes with their industry colleagues.

The Sustainable Food Court Initiative (SFCI) was launched in 2011 to address the zero waste challenges associated food courts and post-consumer food waste. When the National Restaurant Association purchased the ZWZ in late 2012, the SFCI emerged as Elemental Impact's central Recycling Refinement focus through 2016. 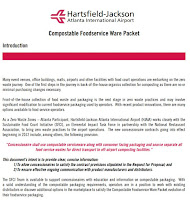 With impeccable timing, the SFCI - Atlanta Airport Pilot was in the midst of the concessionaire RFP for the entire airport when the SFI launched in 2011. The City of Atlanta Office of Sustainability and Department of Aviation team, led by Michael Cheyne, Director of Asset Management & Sustainability for the Airport, made the bold, courageous and successful move to include the following provision in the RFP and subsequent concessionaire contract:


“Concessionaire shall use compostable service ware along with consumer-facing packaging and source separate all food service wastes for direct transport to off-airport composting facilities.”

In October 2011, the SFCI - Atlanta Airport received the Going Green Airport Award at the fourth Annual Going Green Airports Conference hosted in Chicago. The prestigious award recognized the value of the project, as well as outstanding leadership in pursuit of sustainability within the aviation industry.

Plastic Film Recycling
Around 2011 the garment industry shifted from bulk packaging for retail shipments to individual plastic film-wrapped garments; the packaging shift was a response to the explosion of internet sales. Shopping malls witnessed a dramatic increase in tenant plastic film waste, increasing their waste-hauling charges.

Shifting Gears
In 2017 Ei shifted gears within humanity's environmental impact spiral. Ei evolved from a focus on Recycling Refinement and food waste collection for compost to Soil Health, regenerating the foundation of life.


In addition, the Water Use | Toxicity platform plays a strong supporting role.

Meetings are in process with the SFCI Pilot executives to discuss the segue to a SFI Pilot. In addition, Tim & Holly are meeting with new potential pilots

Utilizing the strong SFCI foundation, the Sustainable Facilities Initiative is staged for tremendous impact within the Soil Health and Water Use | Toxicity platforms and beyond. Stay tuned!
Posted by Holly Elmore at 2:16 PM