On November 25, 2020, the Regeneration in ACTION (RiA) Magazine surpassed the 475,000 pageviews milestone! The coveted 500,000 pageviews achievement is mere months away! 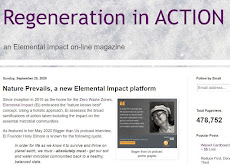 Launched in 2009 as the Zero Waste Zones Blog, the original premise was to document the Zero Waste Zones (ZWZ) successes and later the Recycling Refinement and Sustainable Food Court Initiative accomplishments. When the ZWZ were sold to the National Restaurant Association in 2012, the ZWZ Blog evolved into the Zero Waste in ACTION (ZWA) Blog.

Respected Journalism
Over the past decade, the RiA Magazine, along with sister Ei magazine, The IMPACT, grew into valuable industry-media resources. In 2016 Ei catapulted into respected environmental journalism when the below prominent invitation arrived in early November:

The U.S. State Department invited Ei to join the invitation-only COP22-preview press conference call. Journalists from the Wall Street Journal and the New York Times were among the respected, mainstream media on the call.

The IMPACT Blog article, Ei: Respected Journalism, chronicles Ei's segue from a valuable industry-media resource to respected environmental journalism. In addition to the magazines' contributions, Ei Founder Holly Elmore authored a plethora of industry-trade-journal articles and documents, which are detailed on the HollyEmore.com Fingertip Press page.

Below is a quick magazine-stats overview:

RiA Magazine:
Photojournalism
In late 2017, Holly expanded her journalism to photojournalism with a series of articles published in nationally distributed Southern Farm & Garden (SF&G). The articles showcased Ei's important work as well as Ei Strategic Ally accomplishments. Article images were courtesy of Holly Elmore Images (HEI.)
Ei Digital Books
Additionally, the SF&G articles were published as Ei Digital Books available for view as page-turning-pdf documents on the Issuu platform.
The following SF&G articles were published as digital books:
Ei Article Books
In September 2020, the Fingertip Press published the first Ei Article Book: From Macro to Micro to Nanoplastics, an excerpt from the RiA article, Plastics: a double-edged sword.
From Plastics: a double-edged sword:

The seemingly magical gift of plastic came with a double-edged sword filled with the potential to destroy life as it is currently known on Earth.
In less than seventy years, humans managed to infiltrate the Earth with micro and nanoplastics from discarded single-use and durable products in literally every nook and cranny, ranging from the arctic snow caps to the depths of the oceans and everywhere in between.
It is time to shift perspectives from human-focused to life-focused and let the Earth show us how to heal the damage inflicted. Answers will come to those who live and take action from the heart. 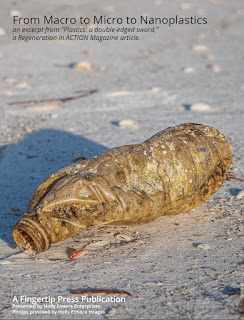 Additionally, the Nanoplastics article includes the following new sections:
Soft cover, magazine-style books are available for purchase at $11.99 each plus delivery; volume-purchase discounts are given. Additionally, a pdf version of the book is available for $8.99. Here is the link to purchase the book: https://bit.ly/3bl2Zxs.
A portion of the book proceeds is donated to Ei, a 501(c)3 non-profit dedicated to Soil Health | Regenerative Agriculture, Water Use | Toxicity, and Nature Prevails platforms.
The Fingertip Press is a division of Holly Elmore Enterprises and the nomenclature for Holly's published articles, documents, and other written communication. Photos in the Nanoplastics book are courtesy of HEI.
Environmental Journalism
In 2015, the National Geographic (NatGeo) Channel invited Ei to join a virtual discussion on the exciting progress in the field of alternative energy. The conversation tied into the soon-to-air Breakthrough: Energy on the Edge episode. Rather than craft a single article, Ei published the following two articles in a point-counterpoint fashion:
With each article, the common thread is a recommended focus on harnessing energy versus creating energy.
Since 2016, Ei was included on environmental press-media lists with regular invitations for interviews and advance-book copies. In fall 2020, Ei received interview invitations from two prominent environmental and conservation photographers. Holly was honored to research, interview, and write articles featuring her heroes. Back in the 2014 - 2016 timeframe, Holly took on-line photography classes from the photographers and holds them in high esteem
The articles catapulted Holly from documentation of Ei's important work into respected mainstream environmental journalism.
The Photo Ark: a gift from the heart
On May 15, 2020, a press release announced the Nat Geo Photo Ark added the 10,000th image to the impressive collection of species portraits from animals in human care around the globe. Each portrait is captured on a white or black background, and published images are the same dimension; thus, a tiny mouse is literally the same size as an elephant in the Photo Ark.

Currently, the Photo Ark boasts 11,230 formal portraits. In addition to the portrait gallery, a comprehensive nearly 40,000-photo Photo Ark Gallery, including in-the-field images, is available for viewing. An excellent search function accompanies the gallery.
Renowned Nat Geo photographer Joel Sartore created the Photo Ark as a vehicle to showcase the Earth's tremendous biodiversity within the Animal Kingdom along with the mass extinction in process.
The RiA Magazine article, Photo Ark: a gift from the heart, chronicles the Photo Ark's history and gives accolades to Joel Sartore for his tremendous commitment to endangered species.
An Evolutionary Call-to-ACTION 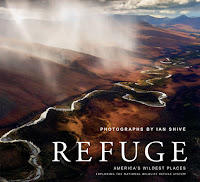 REFUGE, America's Wildest Places, Exploring the National Wildlife Refuge System (REFUGE,) published on October 27, 2020 as an extraordinary coffee-table book; photography is by renowned photographer, author, educator, and filmmaker Ian Shive. As with Ian's prior books, films, and other mediums, REFUGE is a masterpiece and serves as a portal to explore our planet's intrinsic beauty.
REFUGE is a glimpse into the magnificence and sacred nature of the National Wildlife Refuge System (NWRS), one of the largest protected land and water networks in the world. The NWRS encompasses land and water ecosystems coast-to-coast within the continental United States (U.S.) as well as the Hawaiian Islands, Alaska, and U.S. territories.
Ian's profound commitment as a conservationist and educator are destined to make a tremendous impact with his past, current, and future timeless masterpieces. Ian's evolution from stills to motion to cinema to on-air persona expands his audience, reach, and potential influence.
REFUGE is an evolutionary call-to-action for the collective community to preserve and restore the Earth's fragile ecosystems. The Earth will only tolerate a certain quota of human devastation; once the quota is reached the Earth will simply heal herself, most likely to the detriment of the human species.
The RiA Magazine article, An Evolutionary Call-to-ACTION, is an in-depth chronicle of Ian's adventures culminating in the profound book along with overviews of his amazing short films.
FUN: read the article to learn how a 1976 in-concert photo of "The Boss" Bruce Springsteen and the "Big Man" Clarence Clemons flows within the article!!!!
Invigorated Communication Realms
With the 2020 Nature Prevails platform launch, Ei catapulted into expanded realms of influence and impact. The RiA article, Nature Prevails, a new Ei Platform, announces the platform launch in partnership with the Ei Regenerative Working Group (RWG.)
Within the Nature Prevails premise, the Earth heals herself and nurtures renewed life forms, no matter the calamity caused by humans, natural disasters, or extraterrestrial activities.
The IMPACT article, Ei Welcomes New Advisors, announces the impressive new Ei Advisory Council members who are committed to RWG projects and task forces. Additionally, two University of Toronto-affiliated Ei interns researched the Nature Prevails premises necessary for the RWG's important forthcoming work. Future Nature Prevails articles are on the Fingertip Press docket.
During the 2020 pandemic, Holly focused on expanding her technical-design skills to embellish the Ei communication platform. The Nanoplastics book was the inaugural project where Holly designed the book layout.
With a new platform, a stellar RWG Team, and new-found design skills, Ei is staged to soar with invigorated energy in the global environmental network and beyond.
__________________________________________
About Elemental Impact:
Elemental Impact (Ei) is a 501(c)3 non-profit founded in 2010 as the home to the Zero Waste Zones, the forerunner in the nation for the commercial collection of food waste for compost. In June 2017, Ei announced the Era of Recycling Refinement was Mission Accomplished and entered the Era of Regeneration. Current focus areas include Nature Prevails, Soil Health | Regenerative Agriculture, and Water Use | Toxicity.
MISSION:
To work with industry leaders to create best regenerative operating practices where the entire value-chain benefits, including corporate bottom lines, communities, and the environment. Through education and collaboration, establish best practices as standard practices.
Ei’s tagline – Regeneration in ACTION – is the foundation for Ei endeavors.
The following mantra is at the core of Ei work:
Ei is a creator, an incubator.
Ei determines what could be done that is not being done and gets it done.
Ei brings the possible out of impossible.
Ei identifies pioneers and creates heroes.
For additional information, contact Holly Elmore at 404-261-4690 | holly@elementalimpact.org
Posted by Holly Elmore at 7:41 PM