In 2015, Elemental Impact (Ei) introduced the Micro Cost of Macro Contamination (MCMC) platform at the National Zero Waste Business Conference hosted in Austin, Texas in a prominent, well-attended Ei Hosted Panel by the same name. The conference panel focus was to educate on Microplastics: an unseen & deadly poison.

Microplastics enter the human-food system
At the time, the revelation of the prolific plastic invasion into the Earth's waterways and oceans was in its infancy. Scientists were beginning to understand how microplastics created a "plastic smog" within the oceans that infiltrates the sea-life and human-food systems. By definition, microplastics are particles smaller than five millimetres.

Plastic smog clean-up is challenging to impossible due to the microscopic size of the plastic.

Microplastics violate the Earth’s time-perfected regeneration system. Fragmentation, biodegradability and compostability are the foundation of the Earth’s regeneration system:
Note the difference between biodegradability and compostibility is TIME. By definition, material decomposes within 180 days while bio-degradation may take as long as millions of years.

Microplastics in the soils
Beyond the waterways and oceans, soils are also contaminated with microplastics. Per the EcoCycle | Wood’s End 2011 Study, Should Plastic Coated Materials be Allowed in Materials Collected for Composting?:


“This study showed conclusively that micro-plastic fragments were shred from all plastic-coated samples, whether single or double-coated. This means any plastic-coated paper product, even those that are partially screened out during the composting process, is contaminating the finished compost with plastics particles.”

In his January 2019 ABC News article, Scientists say microplastics are all over farmlands, but we're ignoring the problem, author Jon Daly substantiates how plastics find their way into agricultural soils through recycled wastewater and rubbish. Within the rubbish is a significant amount of single-use food and beverage packaging; the vast majority of the packaging is either plastic-coated or 100% plastic. Plastic straws are a prevalent contributor to microplastics in the waterways, oceans, and soils.

The article key points are:

One Less Straw
In November 2016, Ei Strategic Ally One More Generation (OMG) founders Olivia Ries (then 14-years old) and her brother Carter (then 16-years old) launched their global OneLessStraw (OLS) Pledge Campaign. OLS educates the public about the dangers of single-use plastic straws and its effects on our health, our environment, and our oceans. 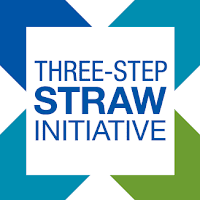 With perfect timing, Green Planet Straws joined the Ei Partner program to support the TSSL shift from plastic to paper straws. OLS participants proved that serving straws only upon request reduces overall straw consumption by 70 - 75%. Thus, the shift to paper straws is essentially cost-neutral as the usage reduction compensates for the higher paper-straw cost.

The TSSI is a perfect avenue for former Zero Waste Zones (ZWZ) participants to take their sustainability commitment to the next level. For ZWZ participants, Step 3 - COMPOST is already in place. Thus, cost-neutral Steps 1 & 2 are an easy-to-implement endeavor.

Though they are a relatively minor portion of the plastic-pollution crisis, plastic straw daily and annual usage represents significant pollution tonnage. Straws are high profile and an "easy-win" in the steps towards eliminating single-use plastic food and beverage packaging. The Three-Step Straw Initiative brings "straw integrity" to the hospitality industry.
Posted by Holly Elmore at 11:43 PM