Airborne grease and smoke generated as a cooking by-product are a fire hazard, an environmental concern and costly to clean. Local and national fire safety regulations require commercial foodservice operations to install a kitchen exhaust system to evacuate heat, grease effluent, moisture and smoke from the cooking area. Generally consisting of a hood, baffle filters, ducts and exhaust fan, the kitchen exhaust system must be monitored and maintained in accordance with the codes.
Most kitchen exhaust systems are inspected monthly or quarterly and require a system cleaning due to grease build-up. On average an exhaust system cleaning uses approximately 350 gallons of water along with toxic cleaning agents. In addition, the metal baffle filters are generally cleaned nightly, requiring labor, water and toxic cleaning chemicals. On average 40 gallons of water is used for nightly baffle filter cleaning.

Elemental Impact Partner Ellis Fibre developed the patented, disposable Grease Lock Filters (GLF) made from a proprietary blend of fire retardant wool. Installed in front of the baffle filters, GLF capture 90 -  95% plus of the AKG before entering the kitchen exhaust system. The filters are easily replaced when filled with grease.

The ZWA Blog article, Zero WATER Waste: more than a goal, a necessity, introduces the foundation of Ei's Water Use | Toxicity Platform along with a GLF overview. Within the Water Use | Toxicity Platform, Ei is creating a Proactive AKG Approach template. In the ZWA Blog article, Airborne Kitchen Grease, a simple solution to a costly kitchen by-product, Ei establishes the four action steps in template development: 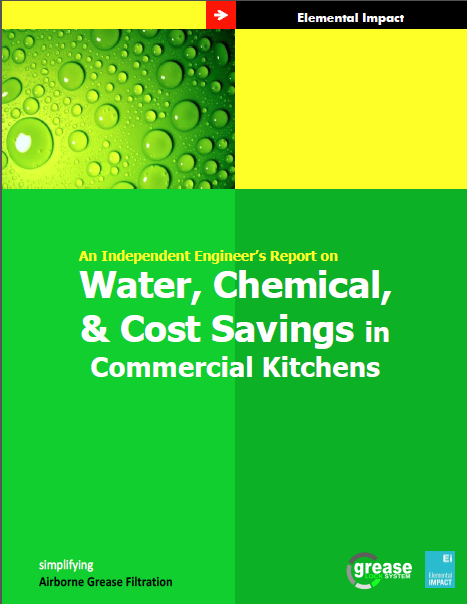 In early 2013 HMSHost - ATL participated in a three-restaurant, eight-week pilot to substantiate the cost-savings experienced by the foodservice operator when using GLF. The Water, Chemical, & Cost Savings in Commercial Kitchens By Using Grease Lock Filters, A Report on Restaurant Pilots is downloadable on the Ei Airborne Kitchen Grease page. Impressed with the pilot results, HMSHost installed GLF in additional ATL concessionaire operations.

“We have had great success using the GLF system—it produces energy and cost-savings, and is good for the environment and for us. We are constantly seeking ways to create efficiencies and minimize environmental impact. The GLF system achieves a cleaner system and improves air quality. We use it at several of our restaurants at ATL.”

In August 2013 the Ei GREASE - Grease Recycling Alternative Solutions for the Environment - Team met with the ATL sustainability, concessionaire and facilities departments to review the GLF pilot report and strategize on action points.

As documented in the AAAE article, a campus-wide GLF installation would save ATL an estimated 1.1 million gallons of water usage annually. Each of the 80+ concessionaires would experience approximately $7,300 in cost-savings per year. In addition, an estimated 42,000 pounds of AKG would not deposit on ATL roofs nor release into the atmosphere.

From an environmental perspective, the water used for cleaning in the current reactive AKG scenario is laden with grease and toxic cleaning agents when released into grease traps or directly into sewer systems.

AKG released into the atmosphere is harmful to air quality and impacts two of the six EPA National Ambient Air Quality Standards: Ground Level Ozone and Particulate Matter. Note the Metro Atlanta area is not in attainment of these two standards. Ei is in the exploration stage to determine if the AKG air quality impact is significant.

Dan Hennessy, Applebee’s district manager for Southern California, affirms the sound business case for using the GLF system with his testimonial: “After the simple installation of the GLF, our chain quickly began to see savings in labor, water, and exhaust system cleanings. On average, each of the stores uses about 1.5 cases of GLF per month, and saves about $2,000 per year from the ease of use of the Grease Lock filters.”

Kudos to ATL for taking an industry leadership role with a proactive approach to AKG. Thank you Michael Cheyne, ATL director of sustainability and asset management, for devoting your February | March  AAAE Asset Management Column to AKG. The article was co-written by Michael and Ei founder Holly Elmore with Liza Milagro, ATL senior sustainability planner, and Jordan Salpietra of Ellis Fibre | GLF substantiating the ATL-specific estimates.

Airborne Kitchen Grease is a new sustainability frontier where ALL WIN: the foodservice operator, the facility, the community and the environment. With Industry leaders like HMSHost and the Atlanta Airport - the busiest airport in the world - at the helm, a proactive AKG approach will spread like wild fire, so to speak!
Posted by Holly Elmore at 10:01 PM