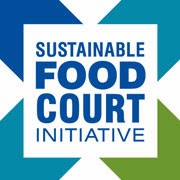 As the Sustainable Food Court Initiative Event Venue Pilot, the Georgia Dome is committed to refining existing recycling practices. In their role as a Founding Zero Waste Zones Participant the Dome built a strong recycling foundation when the program launched in February 2009. Working with the SFCI Team, the Dome is exploring avenues to refine existing practices that increase recycling rates and maximize material value generated at events.


With much of the proverbial "low hanging fruit" addressed, the SFCI Team is in a fact finding mode to understand the next best steps on the Recycling Refinement journey. Three areas of exploration include: 1> increased tailgating recycling with a focus on privately owned lots, 2> post-game food waste & compostable products picked from the Dome seating for composting destination and 3> creation of an on-site mini-MRF (materials recovery facility) where recyclable items generated are baled for sale as a raw manufacturing material.
On Sunday, November 10 SFCI Team members toured pre-game festivities on Falcons Landing and tailgating in private and GWCCA-owned parking lots. Since the September visit, the Dome added recycling bag dispensers on the Novelis dumpsters. Most folks are happy to participate in recycling, as long as it is easy!

It appears little to no recycling is in-place at the privately owned tailgate lots. Under Keep Mecklenburg County Beautiful executive director Jake Wilson's direction, the Carolina Panthers tailgate recycling program is a huge success. With the tailgate lots privately owned, Jake orchestrated an outstanding team consisting of public & private entities working in unison towards the common recycling goal. Jake is happy to share his expertise with the SFCI Team; a goal is to replicate the Panther's model for the privately owned lots near the GA Dome. The ZWA Blog article, Panthers Winning Recycling Season, is an overview of the successful program.

Ei has a strong Charlotte presence and works closely with Jake on many fronts. The IMPACT Blog article, Charlotte Ei Partner Tours, along with the ZWA Blog articles, Bring the Possible out of Impossible, and Scaling Up Composting in Charlotte, NC, document Ei's on-going work in the Charlotte area.


When complete with the pre-game observation and fact finding mission, the Team walked the GA Dome back & front-of-houses noting the recycling practices in-place. Tim educated the group on current systems along with potential near-term upgrades. Although there are ample recycling bins, strategic placement may be enhanced in several areas including the executive level.


Ei Partner Heritage Bag donated a case of their BioTuf Compostable Bags for the food waste & compostable packaging collection. The bags were sturdy and perfect for the job at hand.

Insights during the "bowl picking" included:

The food waste and compostable packaging bags were stored in the GA Dome loading dock. On Tuesday November 12 Doug Kunnemann, SFCI Co-Chair, and Holly met Tim at the Dome loading dock to transport the food waste bags to the Wilbros Organics & Biofuels food waste composting facility in Toccoa, GA. The Wilbros folks agreed to monitor the decomposition of the food waste bags, take pictures during the process and report results to Ei. Upon delivery, the Dome material was placed at a windrow end for easy monitoring.

According to Keaton Thompson, Wilbros compost operations manager, the food waste, packaging and bags immediately began the decomposition process, reaching 138 degrees within 72 hours. Ten days later the windrow temperature reached 146 degrees and decomposition was clearly visible. By December 3 the Dome material was well on its way to transforming into valuable, nutrient-rich compost.


Current bowl picking practices include collecting PET and aluminum bottles in a blue recycling bag with the remainder of the material collected in a black trash bag. The blue bags are placed in the recycling compactor for transport to Waste Pro's local MRF where the material is separated, baled and sold in the commodities market.

Each Falcons game approximately 35,000 programs and 140,000 promotional flyers are distributed among the seats. The majority of the valuable fiber is landfill destined. Ei Partner Pratt Industries operates a cardboard mill within 20 miles of the Dome where cardboard is made from 100% recycled material. In June 2013 Ei hosted a Pratt Mill Tour for Tim and Michael Cheyne, Atlanta Airport director of asset management and sustainability, to learn about the local option for paper | fiber generated at their respective facilities.  Note the Atlanta Airport is the SFCI Airport Pilot.

Within the vision of on-site source-separation is selling recyclable items as a raw material to local manufacturing operations. The Novelis aluminum recycling plant located in Greensboro, GA is another local option for valuable material generated at Dome events. In early October 2013 Tim and Holly toured the Greensboro plant to experience the aluminum recycling process.

Integral to Recycling Integrity - maintaining maximum material value with minimal energy expended - is on-site source separation and local material destination. The GA Dome along with its sister facilities the GA World Congress Center and Centennial Olympic Park are in the initial steps of refining their recycling practices to a program that maximizes material value, uses minimum energy and improves the bottom line.
Posted by Holly Elmore at 3:30 PM