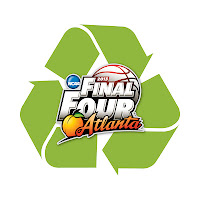 As host to the 2013 NCAA® Men’s Final Four®, the second most popular sporting event across the globe, Atlanta was center stage in the world's sports arena April 5 - 8 . Over 100,000 people celebrated the 75th March Madness in downtown Atlanta at the games, concerts and events hosted in conjunction with the Final Four. The games were played at the Georgia Dome.

One of the Atlanta Local Organizing Committee stated goals was to make the 2013 Final Four the "greenest games ever."

Comprehensive in nature, the plan included green footprints before, during and after the games. Here is the impressive summary of the games' impact:

For in-depth details on the above recap, the Final Four Sustainability Report is available for download on the Elemental Impact Resources page under the Event Recycling section.  Comparisons to prior years along with recommendations for future Final Four hosting cities is included in the comprehensive report.

Thanks to Tim Trefzer's stellar leadership, the ALOC sustainability committee executed a well-organized plan with near perfection that is documented as a template for others to follow. YES, the 2013 Final Four Games held in Atlanta were "the greenest games ever!"